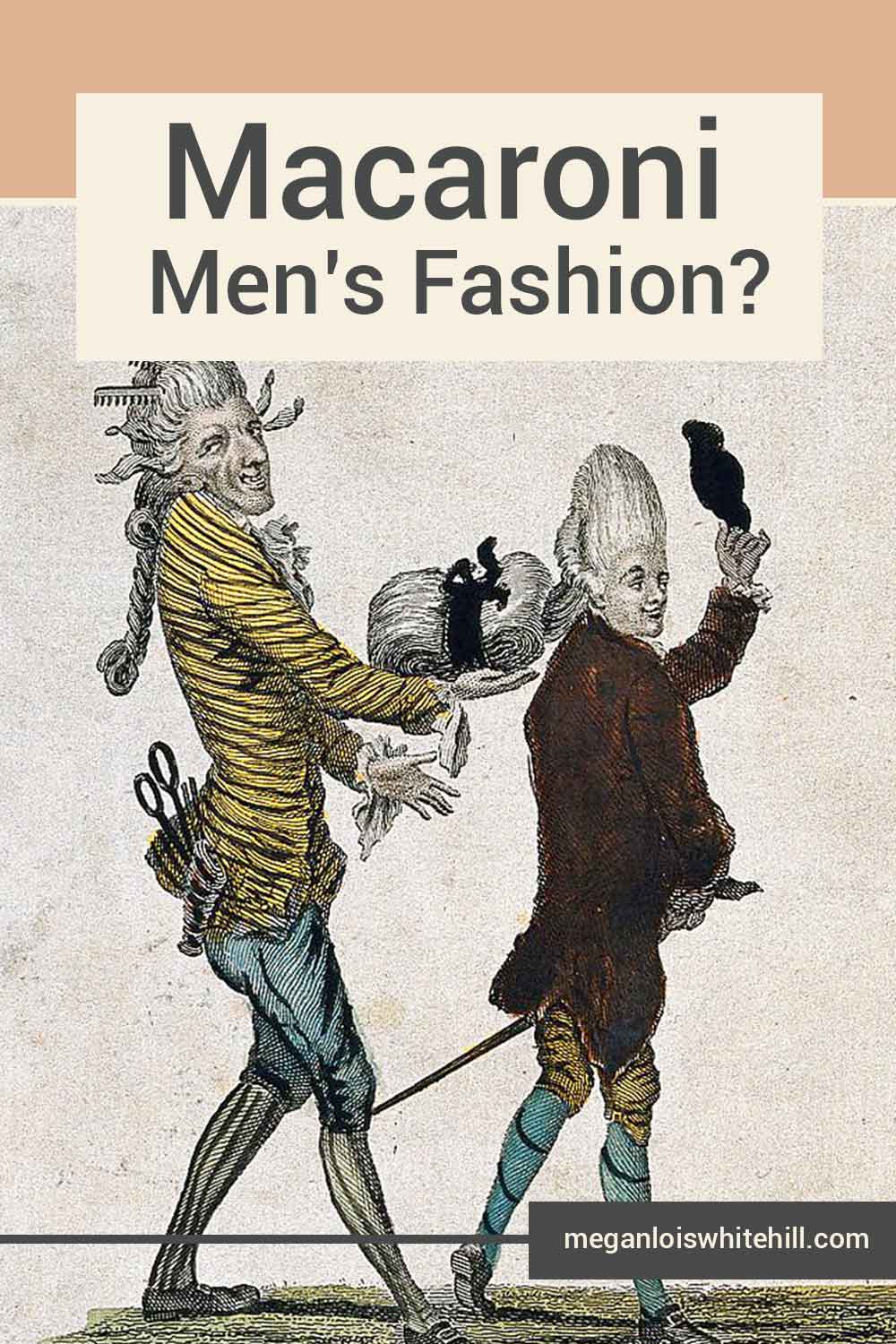 Macaroni men’s fashion. What is it?

I asked myself this question when I spotted this radiantly dressed fellow in The Duchess (2008):

I was watching the film with an eye for the costumes for my podcast episode about The Duchess. This fellow stuck out like a nugget of gold in a bucket of coal. Look at all those dark suits. Look at his colorful outfit. What gives?

I jumped over to the movie’s casting for answers. The fellow is simply named “macaroni” (played by Justin Edwards).

And who, pray tell, was macaroni?

A fashionista, that’s who. A “macaroni” was not one particular person. He was a style. A brand.

In other words, a macaroni was an English gentlemen who went off to Italy and came home wearing vibrantly exaggerated fashions. (Italy = pasta = macaroni. See the connection?)

In the 18th century, macaroni men’s fashion rose to prominence along with its towering wigs. The fashions became so extravagant that they inspired much criticism and caricature. Bright colors. Tight clothing. Feathers in their hats.

Here’s a 1773 drawing of a macaroni by Philip Dowe:

Look familiar? Well, after a detailed examination of the costuming, I would be shocked if this isn’t the same outfit worn by the macaroni in The Duchess.

Let me demonstrate what I mean. First, check out these four similarities:

And if that’s not convincing enough, here’s another list of similarities:

Granted, the movie macaroni is a bit toned down (he is a man, not a cartoon, after all). Yet I am convinced: the outfit is the same. Betcha this drawing was directly referenced by costume designer, Michael O’Connor.

(Michael O’Conner, if you are out there, I’m right aren’t I?)

It makes sense that The Duchess includes macaroni men’s fashion. It is set at the height of the 18th century fashion fad. What makes even more sense is that the macaroni makes his sole appearance in this scene. And why this scene?

The movie portrays Charles Fox as the serious politician that he was.

In real life, he also had a flamboyant side. Even dying his hair blue.

I believe that the macaroni appears in this scene with Charles Fox as a nod to Fox’s penchant for macaroni men’s fashion. (Michael O’Conner, I’m right again, aren’t I?)

Other film portrayal’s of macaroni fashion? I could not find one. Wait, wait. I spotted a suspicious hand muff in I’ll Never Forget You (1951):

In the movie, when Tom Pettigrew steps out for a night on the town, he looks like he stepped out of an 18th century fashion engraving.

What do you think? Was this macaroni engraving inspiration for the costume design?

If you know of another example of macaroni men’s fashion in film or fiction, please let me know.

The closest I could get is Prince Poppycock, modern-day performer and singer. He self-describes as a “rock star in Rococo France.” If I have my dates and eras correct, Rococo was a bit before macaroni fashion went big time. But, I can’t help but see macaroni influence in his persona.

What do you think, is he a nowadays example of macaroni men’s fashion? (Prince Poppycock, when you read this, let me know.)

Macaroni Men’s Fashion and the US Revolution

The other place I found macaroni men’s fashion gone mainstream is in the song Yankee Doodle. Yes, the feathers-in-their-hats won them their place in the US Revolution’s cultural milieu:

“Yankee doodle went to town, riding on a pony.
Stuck a feather in his cap and called it macaroni.”

Find out why in the video below. {Hint: it is not because 18th century fashion feathers looked like pasta.}

VIDEO: Why Yankee Doodle Calls it “Macaroni” by VOX

Along with the video, here are the best resources I’ve found on macaroni men’s fashion on the web. (And for the record, what’s wrong with a hefty dose of color, texture and funky hair? Nothing. Thank you, macaronis of 18th century fashion for stepping out and looking interesting.)

Alright, here we go. The best articles and resources I’ve found on macaroni men’s fashion. You have one to add? Let me know. You writing macaronis into your historical books? Tell me.

Meet the Macaronis is a solid overview of the men at hand. It really does read like a “meet the” piece. Basic names, facts, where they came from, and innovations in 18th century fashions. Plus it includes quite a few quotes about macaronis men’s fashion written in the 1700s. Second runner up for best introductory article is Macaroni: The highly excessive fashion trend of the 18th century by the Vintage News.

ARTICLE: Macaroni and Sexuality in 18th-Century Fashion posted on Brewminate

Was society uncomfortable with macaronis because of bad clothing or because they bent gender norms? The article Macaroni and Sexuality in 18th Century discusses the subtext of what was really going on here. Another read on along the same lines is 18th Century Queer Cultures #1: the Macaroni & his Ancestors by the Victoria and Albert Museum.

Mary Darly made a name of poking fun at the macaronis. She is widely credited as the mother of pictorial satire. David Brass Rare Books has an online gallery of 24 of her 18th century fashion caricatures. Many of these caricatures are of macaronis (along with a smattering of peasants and other social classes). These pictures were drawn in the 1700s. They are live impressions in the stream of time.

Academic in your tastes? Then check out Hair, Authenticity and the Self-Made Macaroni by Amelia Rauser currently available with a free account on academia.edu.

In this essay, I will make two main claims. First, we will see that the macaroni blurred boundaries of class, gender, and nationality, and acted as both a cautionary tale and a secret exemplar for the rising middle classes as they debated how to become urbane cosmopolites while remaining authentically British. Second, I will argue that the medium of caricature was crucial to this debate, since individual portrait caricature not only unmasked the macaroni’s inauthenticity, but also, and paradoxically, made a desirable spectacle out of his eccentric individualism. In both cases, the macaroni’s hair functioned as a potent and multivalent symbol of the self-made man.

If you enjoy reading academic research, read her paper.

If you really, truly want to tumble deeply into the rabbit-hole, then check out this play written in 1777: The macaroni. A comedy: As it is performed at the Theatre-Royal in York. (located for free on the Eighteenth Century Collections Online website.) I must confess that I have not yet read the entirety of the play.

It does, however, bear such interesting gems as the following:

If you have a research headache after the last few entries, relief is here. Watch Prince Poppycock sing Yankee Doodle Dandy on America’s Got Talent. Behold the mashup of almost every angle we’ve discussed:

*Note: this is a living page. I add to it as I find new material and subtract as resources are no longer available online. If you find a link that no longer works, please reach out and let me know.

Macaroni Men’s Fashion in My Work

I’m yet to work macaroni fashion into my writing. I do have a towering wig-sized list of ideas how I’d love to work it into my word-art. Will keep you posted if (when?) it appears in my books.

Let me know if 18th century fashion is a subject that interests you. Be colorful and shine forever.

I use cookies to ensure that I give you the best experience on my website. If you continue to use this site, I will assume that you are happy with it. Thank you.
Do not sell my personal information.
Cookie SettingsAccept
Manage consent

This website uses cookies to improve your experience while you navigate through the website. Out of these, the cookies that are categorized as necessary are stored on your browser as they are essential for the working of basic functionalities of the website. We also use third-party cookies that help us analyze and understand how you use this website. These cookies will be stored in your browser only with your consent. You also have the option to opt-out of these cookies. But opting out of some of these cookies may affect your browsing experience.
Necessary Always Enabled
Necessary cookies are absolutely essential for the website to function properly. These cookies ensure basic functionalities and security features of the website, anonymously.
Functional
Functional cookies help to perform certain functionalities like sharing the content of the website on social media platforms, collect feedbacks, and other third-party features.
Performance
Performance cookies are used to understand and analyze the key performance indexes of the website which helps in delivering a better user experience for the visitors.
Analytics
Analytical cookies are used to understand how visitors interact with the website. These cookies help provide information on metrics the number of visitors, bounce rate, traffic source, etc.
Advertisement
Advertisement cookies are used to provide visitors with relevant ads and marketing campaigns. These cookies track visitors across websites and collect information to provide customized ads.
Others
Other uncategorized cookies are those that are being analyzed and have not been classified into a category as yet.
SAVE & ACCEPT